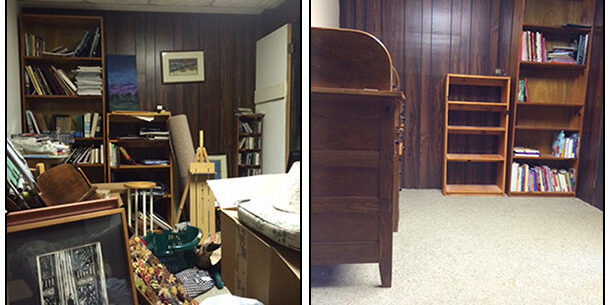 I have a confession to make. The “before” picture you see above (left) is not a stock image found on the internet by searching “clutter.” It is a room in my own house that my husband and I dubbed “the Overbrook room.” We named it after we moved and dumped everything that we weren’t using from our prior home (in Overbrook) into a room in the basement. Then, we basically forgot about it. For 10 years. We only entered the room when some other item we didn’t know where to put found its way to the heap. We didn’t have to see it every day, which added to our lack of interest in cleaning it up.

Last October, I published a post about the gift of an extra hour that we get every fall when we turn the clocks back and suddenly, it’s an hour earlier. Then, I challenged everyone to use it as a jumping off point to set aside an hour a week to accomplish a project that had been languishing.

The beauty of coaching is helping people break down large tasks into doable action items that are less overwhelming. Since this has worked so well for me and many others, I decided that 10 years was long enough to put off this particular project. Since November, my husband and I have been spending an hour a week going through all of the stuff in that room and making decisions on what to do with it. Most of it went to a wonderful service called “Green Drop” where your used items can help veterans and other groups in need.

It is important to stop after an hour. This may see counter-intuitive, because decluttering is a process where things actually look worse for a while once you dive in. You’re unpacking boxes, separating items into logical groupings, waiting for a critical mass to take to wherever you’re planning to donate or sell them and, in some instances giving family members or friends a chance to take a look at things they may need. As you go, the momentum builds and you may find yourself inclined to spend 3 or 4 hours to really make a dent. This is where the discipline to limit your resources comes in. Because, after 4 hours, you will be tired, have spent half of a weekend day and you will not want to return to the task for a while. If you stick to an hour, you may find yourself looking forward to getting back to it. At least that’s what happened for us.

Transforming our Overbrook room took about 4 months, but the effort involved was manageable because we did it in chunks and still had plenty of time to do everything else competing for our attention on those valuable weekend days. Looking at the “after” picture (right) fills me with a sense of accomplishment and renewed belief in the value of goal-setting and not biting off more than I can chew in one sitting.

The ‘Philly Special’: A Lesson in Leadership, Teamwork
February 21, 2018

Grit: The Secret Ingredient of Success in Your Career and Beyond
November 30, 2017