Exposing and Easing Fear of Young Lawyers in the Profession 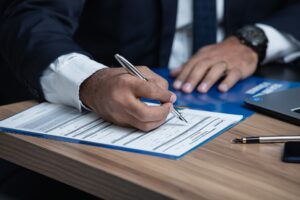 There’s a saying about law school—”the first year they scare you to death, the second year they work you to death and the third year they bore you to death.” This saying implies that students overcome that first-year fear, but for many lawyers, it never completely goes away. I know because I was one of them.

When I read “Untangling Fear in Lawyering: A Four-Step Journey Toward Powerful Advocacy” by Heidi K. Brown, director of legal writing and professor of law at Brooklyn Law School, it put me in mind of the Roberta Flack song “Killing Me Softly With His Song.”

As I read Brown’s words, it was my life she was describing, my pain she was plumbing, and my secret she was exposing. For a large part of my legal career, I was scared most of the time. When a new assignment landed on my desk, I often panicked and the thought went through my mind “what if I can’t do it?”

Terrified to fail, make a mistake, or look like a fool, I struggled through years of legal practice. As a litigator, rites of passage, such as the first deposition, first oral argument, first arbitration and first jury trial were accompanied by a staggering fear of messing up. I call it FOFU. You know what I mean.

From the moment one enters law school, the indoctrination begins that the work must be perfect, errors are unforgivable and there is little to no guidance for the crippling fear these standards instill. No room for error and, therefore, no discussion about how to handle it if it happens.

Brown is changing that. I interviewed her about her career as a litigator, law professor and her excellent new book, “Untangling Fear in Lawyering.” We began with that saying about the first year of law school. Brown commented that scaring students to death is unhealthy because fear blocks learning and performance.

“I agree that is still the message out there, but it needs to change, and it can change the more we start talking about fear out loud. And I’ve seen other professions doing that. The medical profession has classes where they simulate situations that young doctors are going to be confronted with, so they will get fear out in the open and they will get mistakes out in the open and talk it through. Same thing with the journalism profession, but for some reason in the legal profession, we’re taught to just ‘feel the fear and do it anyway’ or ‘fake it ‘til you make it.’ And trust me, I’ve tried all that and none of it works.”

Like the iconic Tom Hanks line in “A League of Their Own,” law students are led to believe there’s no mistake-making in law. But every field has errors. An error-free career is simply not an achievable goal. In some fields, errors are presumed and captured in data-like hits, runs, errors are in baseball. We all have our hits, runs and errors, expectations to the contrary notwithstanding. Why is law the only field where perfection is a pronounced and repeated expectation?

When mistakes are discussed in law school, according to Brown, it is not in a relatable way that prepares students for their inevitability: “law professors tend to use examples of mistakes that lawyers have made that are catastrophic, big mistakes. So, law students sometimes get this thought in their mind, ‘well I would never do that.’ So, that big unethical blunder, that giant procedural mistake is ‘just not something that I would do’ [they tell themselves].”

“Law students have trouble understanding that mistakes actually do happen all the time in the legal profession. Obviously you want to avoid them, but we don’t give students enough opportunity to make those noncatastrophic mistakes in law school and understand how to prevent them, but also how to address them ethically when they do happen in real practice.”

She’s right. When I was a young lawyer, I was hollered at by a boss for misspelling the word “judgment” in a memo. In a voice dripping in angry sarcasm she yelled, “Where do YOU think you’re practicing, in England?” Turned out, I spelled it the British way. I felt bad about it, but getting excoriated for a spelling error seemed then, and now, to be an overreaction and that attitude would not encourage me to come forward in the event of a more serious situation.

The myth of infallibility feeds into and stokes the fear lawyers already have. Being in a state of terror prevents optimum performance, according to Brown: “The fight, flight or freeze response is very real. When I hear law professors or trainers in law firms say that people should ‘just feel the fear and do it anyway,’ that isn’t realistic.” People in a fear state are paralyzed.

Instead of tamping down and repressing fear or following the “just do it” mantra, Brown presents a method to understand and untangle your fear. “I’m trying to help law students and lawyers be able to do that much earlier in their careers that I did.”

Here are two of Brown’s suggestions for untangling fear:

Lawyers need to focus on skills beyond their technical prowess. As Brown wrote for the American Bar Association, “Athletes and performers do not just focus on the talent or skill that draws glory on the field or the stage, such as the ability to throw, catch, hit or kick a ball; the facility to execute a triple flip off a balance beam or on the ice; or the capacity to generate that perfect reverberating guitar echo or hold that powerfully endless note of a song. Real athletes and performers—and their employers and coaches—attend to numerous other facets affecting individual performance. These drivers include emotions such as fear, anxiety and self-doubt; challenges like ego or temper; the realistic need for rest and recovery; the ability to process feedback and critique; and the capacity to rebound from losses and mistakes.”

When you have to do something that scares you, Brown suggests breaking down your performance into two phases: a pre-performance routine to do before entering the arena and a pre-shot routine immediately before commencing the performance.

Create rituals that will support and calm fear. This could include practicing power poses, breathing techniques or listening to empowering songs as examples. When you step into the performance space, begin your pre-shot routine by noticing sensations of fear and adopt a balanced, physical stance while reminding yourself that you’re ready. As Brown says: “you’ve done the work, you’re prepared. You know what you’re talking about. You care about this, you’re entitled to say it in your own voice.”

Brown’s voice has the power to influence and change the way lawyers are educated and trained in law school and beyond. Her book presents a workable solution for practicing lawyers to get a handle on fear and offers an opportunity to create a healthier profession and retain exceptional lawyers who might otherwise be driven away by their daily dance with fear.

Reprinted with permission from the June 5, 2020 edition of “The Legal Intelligencer” © 2019 ALM Media Properties, LLC. All rights reserved. Further duplication without permission is prohibited. For information, contact 877-257-3382, reprints@alm.com or visit www.almreprints.com.