The Benefits of Rewarding Yourself for a Job Well Done 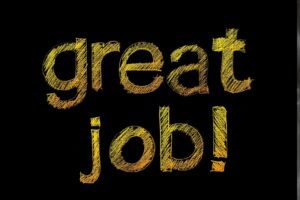 Have you ever signed up for a rewards program? While they vary, rewards programs typically include incentives for doing a specific behavior. If they want you to buy more and more often, you may earn bonus points when you make a purchase and then have a limited time frame to redeem them. That way, you come back quickly. Or, you get a discount, a rebate, a coupon, all intended to keep you returning and doing that specific behavior over and over again. These systems encourage and reward behaviors, which create habits that can last a lifetime.

We love receiving rewards as well as awards. Trophies, degrees, certifications, lapel pins, honorariums, etc. are generally thought to be acceptable, evidenced by the fact that people generally accept them. Some industries host elaborate awards ceremonies and send top sales people on excursions to exotic locations to reward the consistent behaviors they recognize, like surpassing key performance indicators.

These rewards and awards are evidence of an achievement, an accomplishment, and many people like having them around as reminders, to boost confidence, and remember that whatever old unflattering tapes might be playing in your head, you’ve done some things.

If we recognize that external rewards signify something achieved, a benchmark attained, then why do so many people shrink from the idea of rewarding themselves?

Let’s face it, after the graduations are over and degrees awarded, many have long stretches where there’s little reward for things like the heroic act of going to work every day and doing your damnedest to do a great job.

Rewards can be self-motivating, especially when you pick a stretch goal coupled with a suitable reward that matches the magnitude of the effort required. And, they work beautifully for smaller ones when coupled with a lesser, but still desirable treat that you wouldn’t otherwise get.

I routinely ask a question toward the end of coaching sessions that is sometimes met with awkwardness, if not bewilderment. The question is “how will you reward yourself for accomplishing what you just committed to doing?” A common answer is “getting it done will be reward enough.” Or, they tie in something that already happened as a retroactive reward, “I bought a new pair of shoes last week so I’ll earn them by getting this done.” Clients have also said that it feels silly, like a child getting a gold sticker.

Our brains recognize the relationship between effort and reward. Rewards can be a terrific motivator, or there wouldn’t be those reward systems that we have all participated in.  How can you select rewards to keep you accountable for achieving a goal? It depends upon what matters to you.

Howard Stern was talking, on his radio show, about his Peloton bike and an issue he had clipping his shoes to the pedals. After trying different things, it turned out the pedals were reverse-installed and it was a simple fix to switch them. Although it worked out in the end, Howard was frustrated because he spent time dealing with the issue rather than riding the bike. “I don’t want Peloton to think I’m not working out,” he said.

Wow, that got my attention. The only person who would know he didn’t work out was Howard, but it would be reflected in his personal record. What is Peloton doing that might make a person feel seen?

Peloton tracks a slew of data and reports it to their riders daily, including how often you show up, output on each ride, when you’ve hit a milestone in the number of rides or exceeded your own personal best, and they notify you if one of your friends is riding at the same time as you.

If you like competition, there’s a leaderboard where you can compare yourself to other riders who are there or whoever’s taken that same class in the past. There’s a community of riders high-fiving each other and a Facebook page where members share their challenges, triumphs and (for some reason) pet photos. You can receive award badges for activities like riding with a buddy and participating in challenges going on at any given time.

The badges aren’t physical. They simply show up on your profile. You don’t get anything in the mail, nothing to display on a shelf or pin to a lapel.

One day, I posted a question on Peloton’s Facebook page asking the simple question “what do badges mean to you?” Hundreds of people weighed in. As you might expect, the responses were passionate and divided. Isn’t everything these days?

Some posted one-word answers that were pretty powerful, writing that badges mean: everything, progress, motivation, perseverance, accomplishment, achievement, validation, commitment, completion and progress. And, on the other hand, zip, zilch, nada, nothing.

Others were more expansive on what badges mean: “visual reminder of an accomplishment (even small); a pat on the back when nobody else is there to give you one.” And “the gold star one means I’m getting stronger, faster. It encourages me to keep at it when all I want to do is flop.” People compared the badges to passport stamps that say “I was there” and “tokens and treasures collected along my journey.”

Some shared that they don’t get much attention in life and the badges are meaningful for that reason. One person wrote: “As a 37 year old guy, and not a 10 year old child, they mean surprisingly more than I expected.”

This is why rewards must be tailored to what matters to you. If badges mean nothing, you won’t be motivated to earn one.

Rewards are especially helpful if you don’t have someone to hold you accountable. When clients struggle sticking to an exercise program, I often ask who they can buddy up with because we are more likely to show up if someone is expecting and waiting for us.

As you look for ways to keep yourself motivated, especially during that feeling of sameness this pandemic has inflicted, consider how rewards systems encourage behaviors and ask yourself what would motivate you to, say, start or stick with a new routine or habit?

I find that once clients get comfortable rewarding themselves, they come up with the most varied incentives you can imagine. They may pick experiences or extravagances. One said, “this might sound crazy, but I am going to buy a new hardcover book I’ve been wanting (yes, hardcover is still a thing) and spend a whole afternoon reading by myself.” Another opted for a new pair of boots she’d been admiring and others choose dinners out or weekend getaways.

A few tips for effective rewards:

Rewards are a fun aspect of goal attainment and I hope you’ll embrace it and give it a whirl. I’d love to hear what you choose as your reward!

Reprinted with permission from the September 30, 2020 edition of “The Legal Intelligencer” © 2020 ALM Media Properties, LLC. All rights reserved. Further duplication without permission is prohibited. For information, contact 877-257-3382, reprints@alm.com or visit www.almreprints.com.